You are here: Home / Spellcrafting / Difference between a pentagram and a pentacle 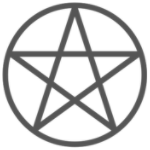 in a circle
PROTECTION

A pentagram is the 5 pointed star. The 5 points represent the elements of air, fire, earth, water and spirit. It stands for spiritual shielding and dominion over the elements. Power, balance and protection.

A pentacle is a pentagram with a circle around it and represents eternity and unity of all elements. This is the direct and indirect relation of one element to another and the connectivity. The circle around the pentagram symbolizes light, love and wholeness.

The Greeks proposed the existence of five basic elements. Of these, four were the physical elements—fire, air, water, and earth—of which the entire world is composed. Alchemists eventually associated four triangular symbols to represent these elements.

The fifth element, which goes by a variety of names, is more rarefied than the four physical elements. Some call it Spirit. Others call it Aether or Quintessence (literally “the fifth element” in Latin).

Before we examine the elements themselves, it is important to understand the qualities, orientations, and correspondences that are associated with the elements. Each element is connected with aspects in each of these, and it helps correlate their relationship to one another.01of 08

In classical elemental systems, each element has two qualities, and it shares each quality with one other element.

Each element is either warm or cold, and this corresponds with a male or female gender. This is a strongly dichotomous system, where male qualities are things like light, warmth, and activity, and female qualities are dark, cold, passive, and receptive.

The orientation of the triangle is determined by warmth or coldness, male or female. Male, warm elements point upward, ascending toward the spiritual realm. Female, cold elements point downward, descending into the earth.

The second pair of qualities is moistness or dryness. Unlike the warm and cold qualities, moist and dry qualities do not immediately correspond to other concepts.

Because each element shares one of its qualities with one other element, that leaves one element completely unrelated.

For example, air is moist like water and warm like fire, but it has nothing in common with earth. These opposing elements are on opposite sides of the diagram and are distinguished by the presence or absence of the crossbar within the triangle:

There is traditionally a hierarchy of elements, although some modern schools of thought have abandoned this system. The lower elements in the hierarchy are more material and physical, with the higher elements becoming more spiritual, more rarefied, and less physical.

That hierarchy can be traced through this diagram. Earth is the lowest, most material element. Circling clockwise from earth you get water, and then air and then fire, which is the least material of the elements.

The pentagram has represented many diverse meanings over the centuries. Since at least the Renaissance, one of its associations is with the five elements.

Starting with spirit, the highest element, we descend to fire, then follow the lines of the pentagram over to air, across to water, and down to earth, the lowest and most material of the elements. The final line between earth and spirit completes the geometric shape.

The issue of a pentagram being point-up or point-down only gained relevance in the 19th-century and has everything to do with the arrangement of elements. A point-up pentagram came to symbolize spirit ruling over the four physical elements, while a point-down pentagram symbolized spirit being subsumed by matter or descending into matter.

The colors used here are those associated with each element by the Golden Dawn. These associations are commonly borrowed by other groups as well.

Ceremonial occult systems traditionally depend on systems of correspondences: collections of items that are all associated in some way with the desired goal. While the types of correspondences are nearly endless, associations between elements, seasons, time of day, elements, moon phases, and directions have become fairly standardized in the West. These are frequently the basis for additional correspondences.

The Hermetic Order of the Golden Dawn codified some of these correspondences in the 19th-century. Most notable here are the cardinal directions.

The Golden Dawn originated in England, and the directional/elemental correspondences reflect a European perspective. To the south are the warmer climates, and thus is associated with fire. The Atlantic Ocean lies to the west. The north is cold and formidable, a land of the earth but sometimes not a lot else.

Occultists practicing in America or elsewhere sometimes do not find these correspondences to work.

Cycles are important facets of many occult systems. Looking at daily, monthly, and yearly natural cycles, we find periods of growth and dying, of fullness and barrenness.

Fire is associated with strength, activity, blood, and life-force. It is also seen as highly purifying and protective, consuming impurities and driving back the darkness.

Fire is traditionally seen as the most rarefied and spiritual of the physical elements because of its masculine properties (which were superior to female properties). It also lacks physical existence, produces light, and has a transformative power when it comes in contact with more physical material.

Air is the element of intelligence, creativity, and beginnings. Largely intangible and without permanent form, air is an active, masculine element, superior to the more material elements of water and earth.

Water is the element of emotion and the unconscious, as opposed to the conscious intellectualism of air.

Water is one of two elements that have a physical existence that can interact with all of the physical senses. Water is still considered less material (and thus superior) to earth because it possesses more motion and activity than earth.

Earth is the element of stability, groundedness, fertility, materiality, potential, and stillness. Earth can also be an element of beginnings and endings, or death and rebirth, as life comes from the ground and then decomposes back into the earth after death.

The element of spirit does not have the same arrangements of correspondences as the physical elements since spirit is not physical. Various systems may associate planets, tools, and so forth to it, but such correspondences are far less standardized than those of the other four elements.

The element of spirit goes by several names. The most common are spirit, ether or aether, and quintessence, which is Latin for “fifth element.”

There is also no standard symbol for spirit, although circles are common. Eight-spoked wheels and spirals are also sometimes used to represent spirit.